Conversation between the artists Eugenio Dittborn and Rogelio López Cuenca

On October 17th Tabakalera will host an open conversation between the artists Eugenio Dittborn and Rogelio López Cuenca. Both are taking part in the collective exhibition Bestea Naiz. Migraciones políticas y poéticas, curated by Alicia Chillida and running in Koldo Mitxelena Kulturgunea from October 18th 2018 to January 12th 2019

In response to a drive for more collaborative activities, and with the L'intrus, exhibition curated by Natasha Marie Llorens (opening on October 26th), Tabakalera is looking at the concept of the ‘intruder’ by means of a collective show from an international line-up. In turn, Bestea Naiz. Migraciones políticas y poéticas takes a multiple perspective to the theme of migration in its widest sense.

The initiative is part of the collaboration between Koldo Mitxelena Kulturgunea and Tabakalera in response to the common threads in their respective exhibitions which will mark the start of autumn. 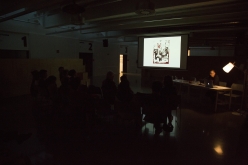