Yuan Li Min is the director of the Wudang Sanfeng Kung Fu School and has dedicated his entire life to promoting and disseminating Wudang martial arts as well as Taoist thought and philosophy for the benefit of anyone who is willing to learn.

Tai Chi Chuan is well known for the habitual sequences of movements performed by its practitioners which are characterised by the union of the consciousness and the movement of the body, slowness, flexibility, circularity, continuity, smoothness, firmness, and the feeling of harmony that they transmit. 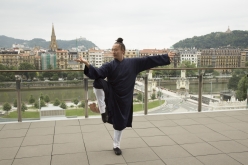